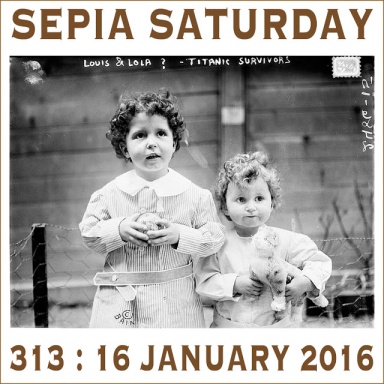 Most people know the story of the Titanic and the Iceberg.  This week Sepia Saturday gave us  a photo pf two young orphans who survived the disaster.

My family had a different kind of sad story with

These are my father’s two younger brothers, Alan and Albert Edward Fricke of Apollo Bay, being photographed in 1920.

At the time this photo was taken my father, their older brother, was 16 years old and was only home on the farm at weekends, the weekdays spent boarding in Colac while he attended High School.

Alan was just six and a half months old which would place this photo as early August in 1920.  Bertie of the golden locks was 2 years and 5 months old.

They talk about people wearing their best bib and tucker.  It looks as though Alan is actually wearing his best “bib” for the photo..

On the back of the photo is written “dear little Bertie”

The photographer was Mendelssohn so the photo was possibly taken on a trip to Melbourne.

For other interpretations of the Titanic orphans go to Sepia Saturday.