Colac is 150 km to the south west of Melbourne in Victoria.  There were 61 students when the  school opened in 1911 and it  was known as the Colac Agricultural High School.  As Colac was the centre of a farming area for some years the Pastoral and Agricultural Society had been agitating for such a school.

Seated at the left end in this 1920 photo is Charles Fricke, who at fifteen  was still to graduate into long pants. He didn’t live in Colac but came up each term from the coastal town of Apollo Bay and boarded privately. He would ride a horse up at the start of term then the horse would go into agistment until the end of term.   Smaller country towns couldn’t justify the need for a secondary school so the primary schools went to  Eighth Grade, after which students at fourteen were able to leave school and go home to work on the farm or take other employment.  Those who wanted more education went to a larger  town with a secondary school , or to a much larger town which had boarding schools.

Two years after Charles was photographed his younger sister Enid (on the right) was also attending the school.  Both went on to be teachers. They were then followed by another brother and two sisters. 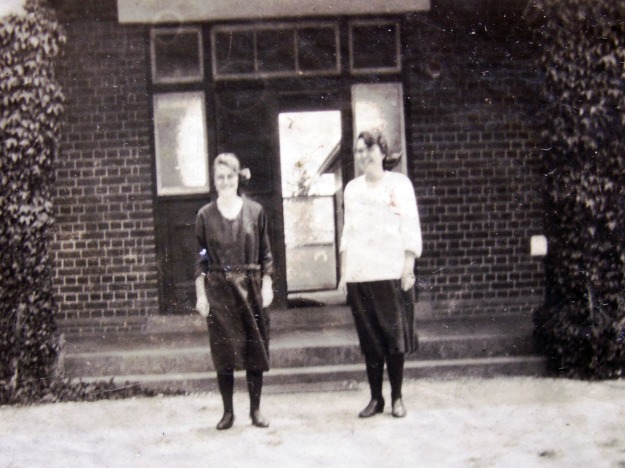 But the original school was closed and since 2008 they do their learning in a  flat-roofed, uninteresting building, a derelict of the future.  1’m sure though that inside this bleak exterior some wonderful education is going on. I just can’t help loving older style  buildings.

The old school became  derelict. The creeper went from the pillars, the weeds grew, the building was vandalized.

Let’s hope they can find some use for the old lady.

More group photos can be found in the list on this week’s Sepia Saturday.