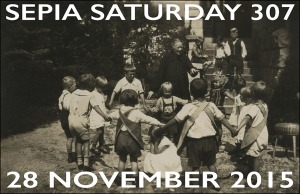 Sepia Saturday’s choice of an image shows some Estonian children playing a game in a circle.  It’s quite possible that the occasion was a birthday party.  It’s also interesting to see that children are wearing the popular pinny  made with crossover straps at the back.  That is a bit puzzling.  Why would the children be wearing pinnies if it was some kind of special occasion. There are  also three children at the back not taking part in the game while an older lady supervises.

It’s not often that a photo of a party or playground game was taken in the 1920s and1930s.  If  was more likely to be a group photo, 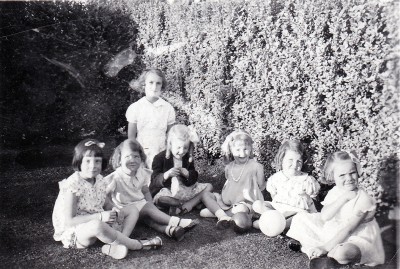 These two photos were taken at Esme Heather’s birthday party in Castlemaine on April 2nd 1936 in the garden  of her home.

Esme is third from the right in both photos.

Just one festive balloon to be seen in each photo.  One of the highlights of a

Heather party was the dressing-up box in Esme’s bedroom.  And a treat with  the food were the home-made lamingtons.

The Heathers lived at “Carinya” at the corner of Fletcher and Berkley St in Castlemaine, Central Victoria.

The next birthday photo was taken at the same place on April 2nd, 1941.  This time everyone had a balloon and a party hat.  Esme is centre front, kneeling,  and her mother Daphne at the left hand end of the back row. 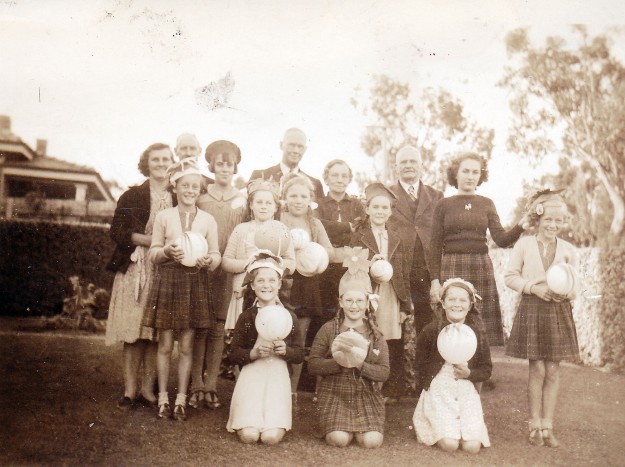 You can see part of  the house next door in the previous photo.  It is still there and can be seen in this shot of Carinya from Google Earth.

Further nostalgic links to this week’s Sepia Saturday image can be found here.

You wanted photos of hair this week.  Just look at the beautiful photos members have been posting.  But let me remind you that not all of us have beautiful, lush, gleaming sensual rolls of thick, lustrous, magniificent hair..  Some of us for the whole of our lives have had thin, stringy, sparse, dull, straight, straight hair which at a time when straight  hair was unfashionable hair  needed to be tortured with strips of rag for hours to have any semblance of a Shirley Temple curl for a special occasion.

The only evidence I have of rag “sausages” on the girl on the right. Newstead 1936.

And for more hair photos go to this week’s Sepia Saturday links.