Grandpa Tom Tansey is turning out to be a good source of family stories, which is surprising because when he died his daughter found her mother busy tossing photos and papers into the incinerator  Fortunately she was able to rescue many of them.

Tom had migrated from Snitterfield in Warwickshire to Australia in 1888 as a 16 year old and came to Geelong to live with his aunt who had migrated many years before and married.  The next year he received the following letter. 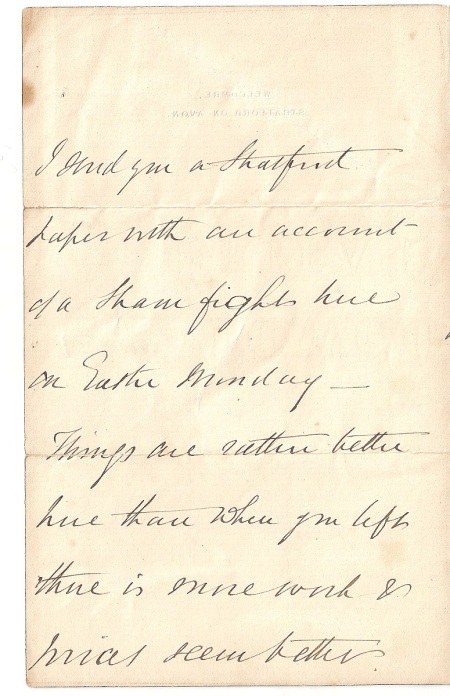 I was very glad to receive your letter of 19 March & find you were doing well.

Enclosed I send you a £5 note to help you on.

Things are rather better here than when you left, there is more work as prices seem better and generally speaking everybody is more cheerful.

I shall be glad to hear how you get on. I trust you will keep your health which is very important.

I am truly Rob N Philips

The family story is that Tom was promised that £5 note if he wrote to Squire Philips to let him know how he was getting on in Australia.   But was he normally a good correspondent ?  Again the family story tells us that  after he was married it was his wife who was responsible for any correspondence with his mother.

Welcombe House was a  country mansion  near Snitterfield and Stratford upon Avon, built about 1835 by the Philips family. The Welcombe estate  included the village of Snitterfield.   It has some interesting associations.  Robert Philips was grandfather of the historian G.M.Trevelyan, and  a subsequent owner, Sir Archibald Flower, financed the original Shakespeare Memorial Theatre in Stratford  on Avon.  Welcombe  is now a hotel.

Robert Needham Philips in 1875, from the Bury Art Museum

But at the time of the letter Welcombe  was owned by Robert Philips.  He formally addresses Tom as “Sir”,  to someone who had just had his seventeenth birthday.  And he mentions sending a newspaper which reported on a “sham fight” at Welcombe on Easter Moday.

Now I promptly thought pugilists and fisticuffs but I was wrong.  I couldn’t find the Stratford newspaper he mentioned but I found plenty of others reporting on these sham fights taking place around the country over Easter, the manouevres being practised by the various regiments.  At Welcombe it was the 1st and 2nd Warwickshire Volunteers.  You can read the reports in the transcripts from the LEAMINGTON SPA COURIER Saturday 27th April 1889  and the Coventry Herald Sham fight.  They sound very like a setting for Midsomer Murders.

But it was this sham fight carried out at Welcombe which led me to the Worcester Cyclist Corps.  1889  .

When you stop and think of the times, the use of bikes for reconnoitering  and passing on communications makes sense.  Most photos you can find show bicycles, not tricycles,  in use by the armies so I wonder how long the tricycle mentioned in 1889 lasted in use,

The Singer Tricycle in 1889 from the Stilltime Collection

This Singer is not to be confused with the Singer of sewing machine fame.

After  the demonstration of military prowess suitably watched by the gentry there was the matter of some refreshments to be had.

So the Snitterfield Band “discoursed music”.  Tom had been a member of this band before he left for Australia. and perhaps he played for the Sham Fight at Welcombe the previous year or at one of the many other times the band played at Welcombe.  R,N,Philips  had given the village a full set of  instruments in 1883 so they could form a Brass Band. Tom would have been 11 then.  I wonder how old he was when he joined the band .

More letters can be found on this week’s Sepia Saturday

17 thoughts on “A Letter from Welcombe”