Charles Fricke Snr (1869-1964) was born at Park Farm, Carisbrook in Central Victoria. He had a moustache for the whole of his adult life and where that moustache went Charles was sure to follow.  Little did he know that one day Sepia Saturday would be interested in his moustache. 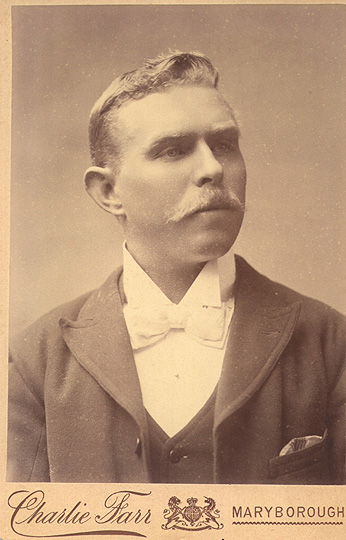 The daughters of the family did as was expected of them and married, so their welfare was taken care of. Of the four boys the eldest son was to have the home farm, Charles, the second son was helped to set up a farm near Apollo Bay on the south coast, and the two other boys went into the public service where they did quite well for themselves.

After working on his father’s farm until he was 21 he selected land at Tuxion in the hills above Apollo Bay. Family members would travel down each winter to clear the bush and prepare a farm.

Charles has left us a description

My Father and brother Alfred and a man went to the Bay a year before me and with the help of a neighbour cut about 70 acres of scrub and left it for the neighbour to burn for us in the summer time. And then my father and I went down to the Bay to pick up what the fire did not burn and sow the grass seed. When I arrived at the Bay after that awful trip, I found a small Hamlet of six houses which did not look very inviting at the time as it was windswept with sand everywhere. We arrived about midday, had dinner and then set out for the selection. We travelled as far as the foothills and left the Waggonette there as it was impossible to take it to the selection which was 700 feet above sea level. Then came the task of getting all out things to the Selection. Imagine me sitting on one of the horses, carrying the tucker box (a gin case) in front of me, especially as I was born and bred on level country, and father on another horse, leading the third with a big pack of blankets etc

As they always travelled down in the winter the conditions were atrocious.

After climbing several mountains, up hill and down dale, it was still raining when we came to a level piece of ground where the water was pouring down the sides of the surrounding mountains making the flat a complete quagmire. We were struggling through the mud when the leader in the Waggonette almost disappeared in a bog hole where the poor brute lay. It seemed as though the heavens had opened and let out all it=s rain. The hole had been made by Bullock-Waggons, and the rain had filled it with mud and slush. So my father and I took the other two horses out and put a chain around the leaders neck and pulled it out of the bog-hole. Then we cleaned the horse as best we could, yoked up and travelled on. As it was often raining and too wet to light a fire, we made a practice of getting hot water when possible from the Settlers

They split palings and built first one room, then two more. The following year once the harvest was complete at Carisbrook Charles brought down the first cattle to his new farm.
And by 1896 the farm was fully operational.

About that time – 1896 – 1897 – I did not go home to Carisbrook for the harvest, as I was milking some cows, making butter and sending it to Melbourne whenever a boat came into Port, which was not at regular intervals as Apollo Bay was an open Port, making it dangerous for small boats. With the butter returns and a few head of cattle I used to sell, the place was beginning to pay dividends.

But in 1898 the bushfires came through and destroyed everything.  It was time to start all over again. But that’s another story. 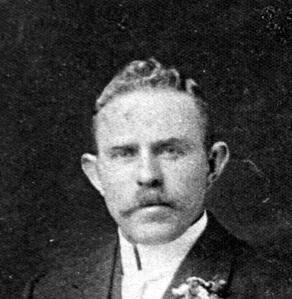 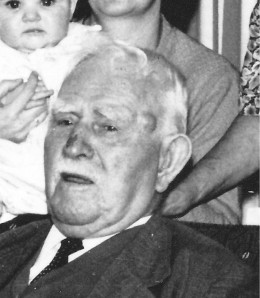 And for this week’s collection of moustaches go to Sepia Saturday.

13 thoughts on “Attached to a Moustache”